Is US a more unequal country? 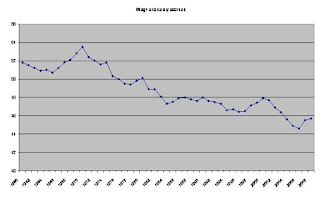 Does that mean that workers are receiving less portion of what is produced? Therefore is US more imbalanced? Yes and no. What is agreed is that workers are becoming paid with not only wage but complementary retributions like health insurance, pensions…. What is called Employees Compensation. Moreover, more population is self-employed and freelance that in the past. This means that we should add those retributions and ways of work to wage account. But, still with this aggregate there are studies asserting that Employees compensation portion is sinking and other studies asserting the opposite. It all depends on how you count it.
See: 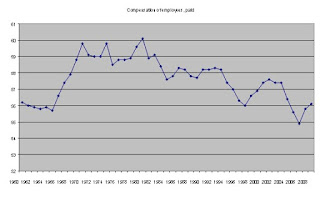 
One point not considered by the second study is that a portion of GDP has to be devoted to capital depreciation so it goes to nobody, not capitalists or workers. Once this is considered the result should be first study, they say.

And that’s not all, a study published in The Economist argued that inquality is not just a matter of income but a also a matter of costs. The article was based on a paper that argued inflation for rich people product’s to be higher than those for poor people. Therefore, the difference in inequality would be lower than considered first.

So, as usual in economy, a hazy subject.