Debt is an interesting measure. Indebtedness is the cause of almost all crisis. To trust too much in something you don’t know, to expect bigger returns than reality does. These are errors, but somehow unavoidable errors connected to what is unforeseeable, the future. We all do mistakes about future, we all have expectations so it does stock markets, financial institutions, households and Governments.

How could we know when are we expecting too much? We can’t, at least ‘a priori’.
A graph has been used recently to show irrationality of recent debt burden. 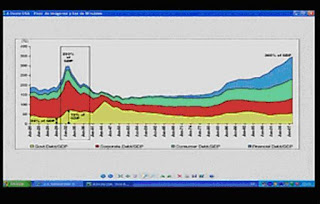 This graph shows %of Debt / GDP of all sectors of the economy for US.
Yellow is Government, red is for companies, green for households and blue for financial institutions.

The peak in the first part of the picture is 1929 bubble and late soaring starts in 1983 till today (or last year at least).

Therefore it seems that recently we have been in an irrational indebtedness but unfortunately (and I say unfortunately because is a very nice and understandable graph), this graph is technically wrong and analytically meaningless.

Credit-Suisse's has criticized it. According to them this graph is the aggregation of two.This is how the (aggregate debt) chart should look… 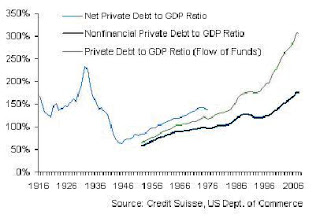 The earlier data was extracted from the Economic Report of the President and adds together household debt and corporate debt, both financial and non-financial. This report was discontinued in the 1970s. The later data comes from the flow of funds accounts and breaks out financial and non-financial debt, starting in the 1950s. The growth in the two measures is very similar for the overlapping periods, but the levels are somewhat different. Chart I splices the two series together, using the higher number as the base.

This does not imply that banks, hedge funds and investment banks did not become dangerously over-leveraged in the last cycle, but it does imply that one could and should look at quite different statistics to measure this.

Why? Because we can not show it this way. There are too many differences in time. Today things are different and better. We can trust in future more than before, there is no Cold war, there is more freedom, democracy, free information ... Moreover, we are richer and technologically superior so we can take a bigger leverage. Lowest interests rates since years prove it.

Strictly talking for households.
Following chart, looks only at household sector debt to GDP. Here, only in the last housing boom did household leverage clearly exceed the levels of the 1920s. If there is a problem with household leverage, then it is a relatively recent one and not necessarily massive in scale. Credit Suisse says. 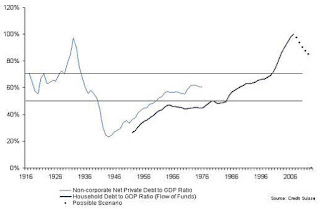