A more enjoyable way than hearing US presidency speeches is to analyze their speeches by words and sentences. This is what I tried with the last presidency debate in fall 2008.
A beautiful way of showing the results of the debate is the following (with Wordle): 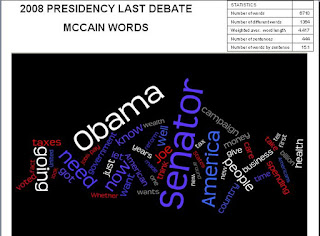 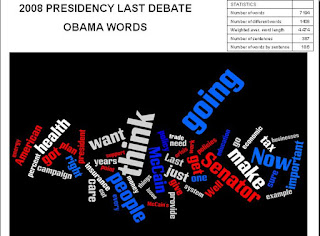 These were the most used words by each candidate (excluding those shorter than four characters). We can see that McCain’s two most used words were ‘Senator’ and ‘Obama’ (111 times together). Senator refers clearly to Senator Obama. However, its much more difficult to find words referring to McCain from Obama (63 times). This is something for what McCain was much criticized from Republican’s side moreover if we consider, see below, that McCain said less words in total.

The rest of the words said by them were, in the case of McCain, ‘America’, ‘need’, ‘now’ and ‘going’ and in the case of Obama, ‘think’, ‘people’, ‘going’ and ‘now’. ‘Now’ was used by both due to the emergency situation, economically. ‘Going’ is commonly used to construct future sentences so naturally they were whether exposing their respective plans and programs or their thought about the future. The first difference was ‘America’ against ‘people’, those are political spectrum words pretty linked to Republicans and Democrats respectively. The second difference is ‘need’ from McCain versus ‘think’ from Obama. I would say that the second word is much more evocative, freer and opened. In the other hand, ‘think’ is more reflexive and ‘need’ is basically an action verb. Also here those are words quite linked to Democrats (said to be more reflexives) than Republicans (said to be more pragmatics).

The rest of analysis is pretty fun. Assuming that they were assigned with the same number of minutes to speech (a common rule in all debates) we can conclude that Obama was able to say 7% more words than McCain (7194 vs 6710, including all words), a faster talking. Moreover, Obama used a larger variety of words, 3% more variety (1408 vs 1364). Again words from Obama were a little bit larger, 1% larger, than those from McCain (4.47 vs 4.42 characters by word). Finally, Obama used less sentences than McCain what means that Obama sentences were larger than McCain, 23% larger to be precise.

In conclusion, Obama showed a better grammar and lexical proficiency, but we don’t know if that’s why he won the elections, I guess not.