In few months all European countries with economic pains have changed their governments. Two of those changes have been imposed by Europe -Greece and Italy- and the rest -Ireland, Portugal and Spain- had to move ahead their own elections to answer markets and populations woes. The five of them changed their president or prime minister, in some cases because the political party in head of government changed in others a technocrat was imposed. One interesting aspect would be to quantify that change. It is not the same to change the ruling party than to change also its leaders and most important members. However, measuring something like that is hard work. An inaccurate proxy would be to estimate the age of the party leaders and hope to be a good estimation of countries’ renewal.
That is what you can find in the figure below. Each line represents the weighted average (weighted using their parties number of seat in each general election) of main parties’ leaders for each country. So, for example, in the case of UK in 2010 I used Cameron age, Brown age and Clegg age and made a weighted average using their parties’ number of seats in 2010 election. In USA where party leaders in no-election years are fuzzy, I took presidential candidates. As example, from 2008 till 2011 I used Obama and McCain ages and weighted them using their number of seats in 2008 election. 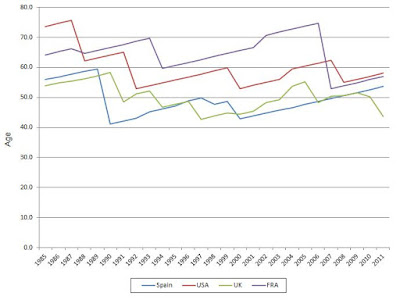