World Values Survey is an international survey that collects and analyse data on moral and ethical questions. The project is amazing.

In order to summarize information they came with this chart: 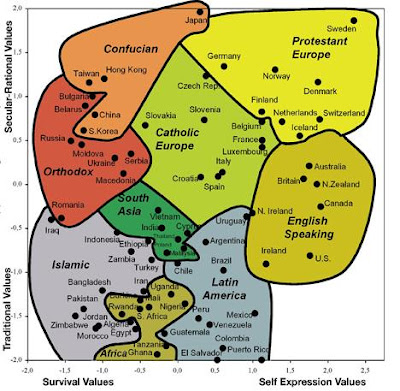 Where each axis is defined as:

"The Traditional/Secular-rational values dimension reflects the contrast between societies in which religion is very important and those in which it is not. A wide range of other orientations are closely linked with this dimension. Societies near the traditional pole emphasize the importance of parent-child ties and deference to authority, along with absolute standards and traditional family values, and reject divorce, abortion, euthanasia, and suicide. These societies have high levels of national pride, and a nationalistic outlook. Societies with secular-rational values have the opposite preferences on all of these topics.

The second major dimension of cross-cultural variation is linked with the transition from industrial society to post-industrial societies-which brings a polarization between Survival and Self-expression values. The unprecedented wealth that has accumulated in advanced societies during the past generation means that an increasing share of the population has grown up taking survival for granted. Thus, priorities have shifted from an overwhelming emphasis on economic and physical security toward an increasing emphasis on subjective well-being, self-expression and quality of life. Inglehart and Baker (2000) find evidence that orientations have shifted from Traditional toward Secular-rational values, in almost all industrial societies. But modernization, is not linear-when a society has completed industrialization and starts becoming a knowledge society, it moves in a new direction, from Survival values toward increasing emphasis on Self-expression values".