I’ve just read a new paper from a Yale researcher called M. Keith Chen which is extraordinary. This paper states that there is a statistical significant relation between languages and saving rates, health quality and retirement assets. In his own words:

"In this paper I test the hypothesis that languages which do not grammatically distinguish between present and future events (what linguists call weak-FTR languages) lead their speakers to take more future-oriented actions".

In other words, if your native language distinguishes between future and present, as it is in English, Spanish or French…, you are more likely to separate present actions from future consequences. That is a problem because:

"speakers of weak-FTR languages save more, hold more retirement wealth, smoke less, are less likely to be obese, and enjoy better long-run health. This is true in every major region of the world and holds even when comparing only demographically similar individuals born and living in the same country".

This is astonishing, and even more astonishing is the fact that these effects are only caused by language itself and not culture:

"while both language and cultural values appear to drive savings behavior, these measured effects do not appear to interact with each other in a way you would expect if they were both markers of some common causal factor…". "…the effect of language that I measure occurs through a channel that is independent of either cultural or cognitive differences between linguistic groups".

It seems that due to language differences only, people behave differently, but Mr. Chen himself do not rule-out other possibilities.

"Nevertheless, the possibility that language acts only as a powerful marker of some deeper driver of intertemporal preferences cannot be completely ruled out. This possibility is intriguing in itself, as the variation across languages in FTR which identify my regressions is very old".

The author pay special attention to the relation between savings and language which appear to be pretty consistent:

"On savings, the evidence is consistent on multiple levels: at an individual’s propensity to save, to long-run effects on retirement wealth, and in the aggregate with national savings rates".

A bunch of regressions are applied using international surveys and national accounts data to link both variables and get rid of other possible indirect relations. As it can be seen FTR is always a significant covariate: 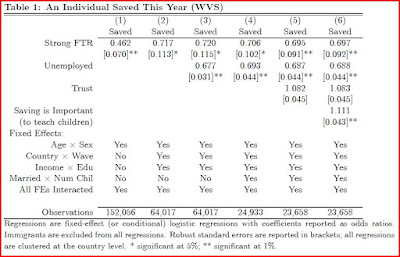 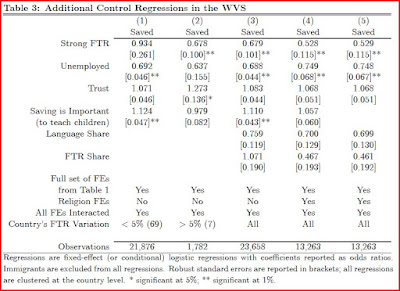 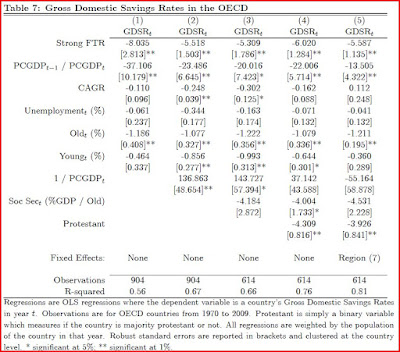