In March I wrote about blogging impact on academic papers. This the second part of it. Again I refer to an old post from World Bank Development Impact blog. This time Mckenzie and Ozler look at what impact blogs have on authors' relevance. Apparently blogs shouldn't have any influence on academic world. But surprisingly they do influence economists views:


Davis et al. (2011) conducted a survey of academic economists in the U.S., with 299 (15%) responding. The survey asked these academics to list up to three living economists over the age of 60 and up to three under the age of 60 who they “regard with great respect, admiration, or reverence”. Gary Becker, Ken Arrow and Robert Solow were the top choices among the over 60s, and Paul Krugman, Gregory Mankiw and Daron Acemoglu the top choices among the under 60s. The under 60s list of 23 names contains a number of regular bloggers – in addition to Krugman and Mankiw are Steven Levitt, William Easterly, Nancy Folbre, Dani Rodrik, and Tyler Cowen. We merge this list with a list of the top 500 economists according to the RePEc rankings (based on paper downloads, citations) and also code each of the RePEc top 500 according to whether they blog or not. This data is then used to estimate a probit model to see whether, conditional on RePEc ranking, individuals who blog are more likely to appear on the above list of favorite or admired economists. Table 2 shows the results, for the pooled sample in column 1, and separately for under 60 and over 60 economists in columns 2 and 3 respectively. 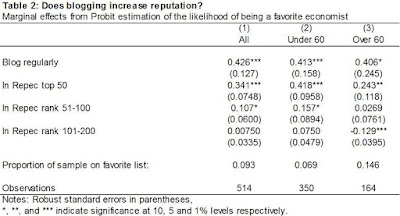 In all three columns we see that, conditional on their RePEc rank, regular blogging is strongly and significantly associated with being more likely to be viewed as a favorite economist. Blogging has the same size impact as being in the top 50 of RePEc rankings for the under 60 economists, and a larger impact for the over 60 economists. This evidence is thus consistent with the view that blogging helps build prestige and recognition in the profession, with bloggers being more likely to be admired or respected than other academics of similar (or in many cases better) publication records.

Unknown said…
I am writing my guarantee project and getting important points from different blogs and forums and This is my pleasure to being here on this blog..
November 22, 2012 at 5:55 AM