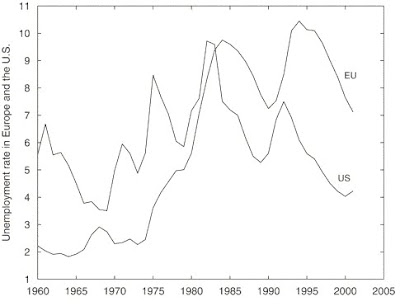 The best theoretical explanation of these events was made by Blanchard and Summers 1986 paper, “Hysteresis and the European Unemployment Problem”. Blanchard and Summers explained that the reasons for that change of pattern were the industrial changes of the 70’s and the raise of long-term unemployment. In short, the 1970’s welfare organization in Europe provided a net for those falling in unemployment. But in a period of industrial change, unemployed people relied too much in welfare and did not realized that the rules of the game had changed forever. They were not going to find the same jobs anymore, because those industries were not there anymore. So, long-term unemployed became chronic in Europe. Inside Europe no other country illustrates unemployment theories better than Spain. Spain’s case has an interesting extremist unemployment market. The roots of which can be found at Franco’s dictatorship that for 35 years had been created a paternalistic, hierarchical and rigid society where changes were hard to make. When in late 70’s Spain got rid of the dictator the global economic changes of the 70’s hit Spain really hard (in fact, any global change would have stroke that rigid society). So, just exactly when Spain was defining itself as a democracy and creating new set of laws, a huge economic crisis stroke and so the Spanish society became paralysed of fear and a military coup d’état. Many necessary changes were indefinitely postponed. Thus, old-fashioned laws let long-term unemployment in Spain become a common situation, much more common than in Europe. Unemployment rates never dwindled below 8% levels, but reached 20% during the 80’s and 90’s crises. In order to decrease long-term unemployment the Government created new temporary contracts that were in many cases applied to some of those long-term unemployed. However, the consequence was that two labour classes were pull apart. One class was for those unemployed or in temporary contracts and the other was for those with permanent contracts or civil-servant positions. This is how Spain became the perfect example of what has been called Dual Economy or Insider-Outsider theory. According to it, Spain’s Insiders are those with permanent jobs and civil-servants and Outsiders are those who are in temporary jobs or unemployed. The first ones are over-protected by labour laws and collective bargaining (another Franco inheritance). Wages and working conditions for workers under permanent contracts are covered by these collective bargaining agreements that protect them. The salary bargains in Spain are made at province and industry level by trade unions and employers’ organizations. Collective agreements have the status of a law, affecting all workers and firms in the relevant area. In consequence, firms can not adjust wages to their own productivity and sacked them or changing their status is very difficult (even more difficult for civil-servants). By contrast, Outsiders have to bear most of the precarious jobs and unemployment periods. Out of the 1.6 million employees to have lost their jobs since mid-2007 till early 2012, 1.4 million had temporary contracts. Today’s unemployment in Spain is outrageous. The latest figure showed at staggering 24.4% unemployment rate, (50% of youth unemployment) by far the highest rate of the developed world. The cause is still the same as in 80’s and 90’s, the Insider-Outsider division. The best way to prove it is by using this chart (modified from NeG): 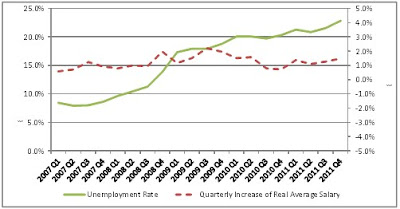 This chart contradicts the basics of economics and the basics of demand and supply theory. Real average salaries increases in Spain were, since 2007, always above inflation. Even when unemployment reached 24%, salaries increases were above 1%. The only possible explanation of this is the Insider-Outsider theory. How could this situation not be changed? The answer is because Insiders have a lot of political power. Young people and Outsiders in general have been always a minority in Spain (although a big minority). Labour rules were only changed, marginally, three times since 1980 and they all happened when Outsiders were a majority, in 1994, 1997 and 2012. You may ask yourself that if Outsiders’ minority is the problem, Why Netherlands, Germany or Sweden outsiders are not suffering the same or even worse burden? The key point here is, when and how were the rules of the game established. For Spain it was the worst possible moment and that determined the labour market equilibrium of today.
Labels: unemployment

Unknown said…
I hope this rate lessens at this point. Safety net such as income insurance is good but without striking the main cause of unemployment, safety nets are only going to be good in a short period of time.
September 9, 2013 at 2:04 AM