If you are nowadays a PhD student in Economics you will be glad to know that according to this paper from Michael Boehm and Martin Watzinger, you are probably going to be a more productive researcher (in terms of academic publications) than if you were graduating in a glorious economic period:

So, this increase on PhD’s productivity is coming from a shift on talented people career decision, from business sectors to academic sectors. Thus, this is a positive consequence of economic recessions, when “talented individuals choose to work in entrepreneurship or research instead of rent-seeking sectors, this may have some social benefits that subtract from the immense adverse effects of downturns” 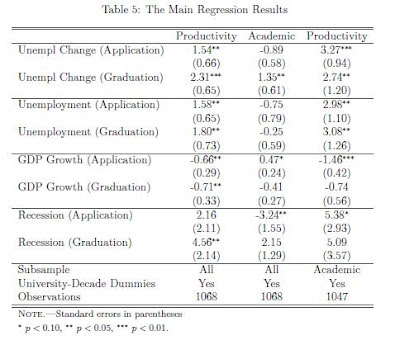 In the first column, the outcome variable qi,t is the average publication output of a cohort of graduates from university i in year t. In the second column, it is the average propensity to decide in favor of an academic career after the PhD, and in the third column, qi,t is the average productivity of those who stayed in academia after the PhD. Application and Graduation rows takes into account the date of the measurement. Application means that the measure was made when the students applied for the PhD and Graduation when graduated.

Unemployment change, both at time of application and at graduation, has a significantly positive effect on research productivity at the five and one percent level, respectively.

There's something unclear about it. If people graduated in gloomy times are more produtive than those from normal times why are their salaries lower in the long-term? As Oyer said

Unknown said…
Thank you for the read. Honestly you covered the topic and broadly examined all areas. If i was to write thishttp://www.trustwebsitehostingreviews.com/
i would have done a few things differently myself but you have definitely inspired me to get into the world of blogging. Thanks heaps for the post i really appreciate it. Have a good day and keep blogging
November 5, 2013 at 11:14 PM