European colonization was the root to present economic development

Easterly and Levine wrote a new paper about development. This time is about European settlements and its effect on economic growth. Many researchers theorise that Europeans have been a source of development and have spread economic growth worldwide (see Acemoglu, Johnson, and Robinson 2001 paper). European colonizers made other regions rich trough institutional, technological, cultural, and economical channels. Although, there seems to be an important consensus on this, no one had carried a proper empirical analysis due to lack of proper data. Easterly and Levine, “construct a new database on the European share of the population during the early stages of colonization and examine its impact on the level of economic development today.” Their results agree with the consensus: “We find a remarkably strong impact of colonial European settlement on development” They specifically argue for European effect and not only British or Protestantism. These arguments may sound Euro centrist but data is clear about it: “According to one illustrative exercise, 47 percent of average global development levels today are attributable to Europeans”. “The regressions suggest that Europeans brought factors of production that boosted long-run economic development, especially among colonies with a only a few Europeans.[…] A marginal increase in European settlement in a geographic area during colonization had an especially positive effect on the level of economic development today within that geographic region.” 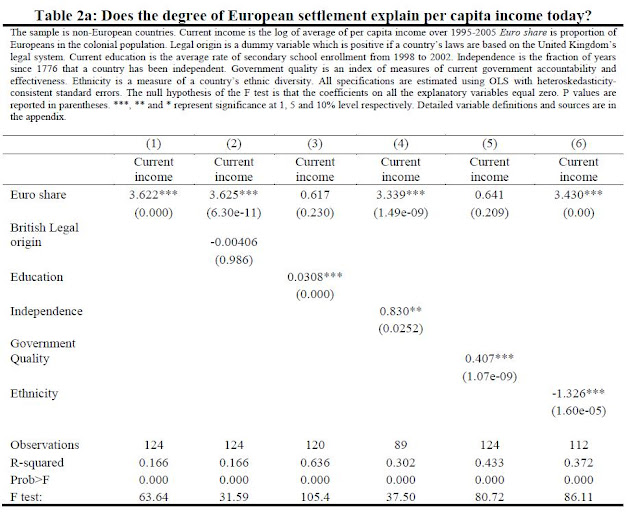 I feel there is something missed in all these studies. They always use present times as point of reference. However, Europe hasn’t been always the apex of the world power. During Middle Ages the Arab world was the most powerful and technological advanced society. China was the world superpower during centuries. Ancient Egypt (Africa) was also the centre of the world before Christ. Is it true, however, that the economic expansion that Europe brought to the world is by far larger than this other civilizations, but is also true that Europe wasn’t born in the vacuum, it owes everything to China, Egypt, Babylonia, Mesopotamia,….
Labels: development