The Olympics are under way in London and everyone is expecting great results for their country. There are also many newspapers publishing charts about the medals tally and its relation to each country’s population (see The Economist, for example). Although Olympic winners seems pretty random and difficult to predict, there are people who have been able generate interesting models to estimate country’s total medals. The best analysis I could find out was made by Xun Bian a student of Illinois University in 2005. Results are shown in the following table. 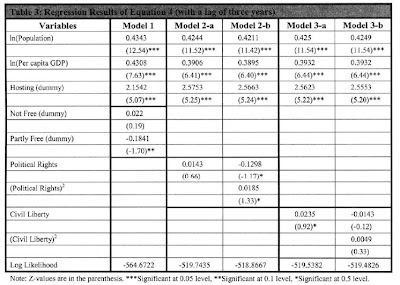 Population effect is positive and significant as it is GDPpc and a Dummy for the host country. What is not so evident is the effect of civil and political liberties. Two reasons may explain that. First, clearly civil and political variables are affecting GDPpc so part of their explanatory power is inside GDPpc variable. Secondly, is interesting that the fact that communist countries like USSR (back in the 80’s) or Cuba had more medals than freer countries. This is due to the fact that communist countries had a huge central Government capable of good sports achievements and willing to take political and ideological profit from their results. However, most Not-free countries were too poor to maintain any competitive sport infrastructure. Graphically, the relation between medals and GDP is not evident as it is for GDP and number of competitors. Below I show this second relation only for Beijing’08.