This paper is an old one (2005 is old?). It deals with the old debate of banking concentration, banking efficiency and systemic risk. In fact, in the second line of the introduction, authors states:


Indeed, economic theory provides conflicting predictions about the relationship between the concentration and the competitiveness

So, apparently there was nothing but conflict about this issue. But this paper was/is a milestone not only because Levine is one of the authors but also because is the first paper to use a goodly amount of data: 69 countries and 20 years


Using data on 69 countries over the period 1980–1997, this paper provides the first cross-country assessment of the impact of national bank concentration, bank regulations, and national institutions on the likelihood of a country suffering a systemic banking crisis

It is true, Reinhart and Rogoff 2008 book was even more of a milestone but I will talk about it in another post. What I like about this paper is that it was written before the Great Recession and they came up with the following conclusion that contradicts today’s main pro-regulatory arguments:


crises are less likely in economies with more concentrated banking systems even after controlling for differences in commercial bank regulatory policies, national institutions affecting competition, macroeconomic conditions, and shocks to the economy. Furthermore, the data indicate that regulatory policies and institutions that thwart competition are associated with greater banking system fragility […] our analyses suggest that the relationship between concentration and crises is not driven by reverse causality.

Results are pretty clear whatever the control variables are:
Including economic indicators: 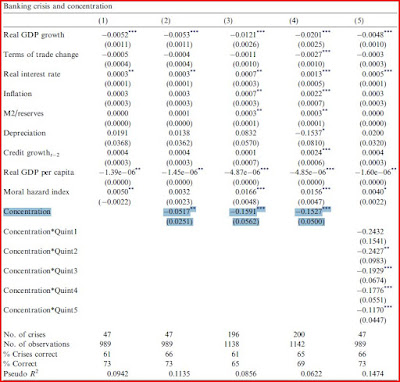 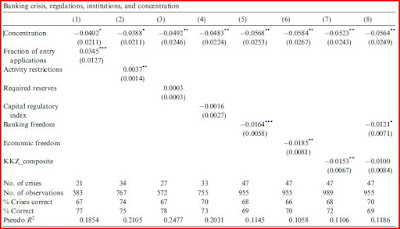 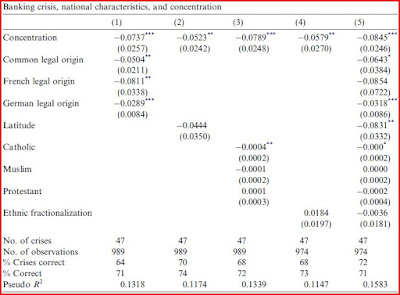