A new threat seems to haunt the European Union, nationalism. It is spreading all through the continent, from  to  and from  to . These movements claim to be against the political unification of  but nationalisms has also spread to the existing countries itself. Some regions have raised for independence as never before.  pro-independence movement has grown hugely in the last years, as it is the case in .

It is pretty obvious that anti-EU nationalism and the regional pro-independence movements have the same root, the European economic crisis. Sovereignty conflicts have been always very linked to the situation of the economy.

Since late XX century academic research has analysed regionalism and nationalism movements from the economic perspective. The last paper I know of comes from Nicholas Sambanis and Branko Milanovic.  Branko Milanovic is well-known economist from the World Bank and an expert on inequality issues. In “Explaining the Demand for Sovereignty” both authors analyse the roots of sovereignty demand and reach an interesting conclusion: wealth is the most important factor behind sovereignty demands and not ethnicity.

In their own words:

“richer regions are more likely to want more autonomy and conflict arises due to a disparity between desired and actual levels of sovereignty."

According to a previous paper from Buchanan and Faith (1987) the success of a regional independence movement depends in part on that region’s wealth.

There are, however, other factors:

The regression results and variables used: 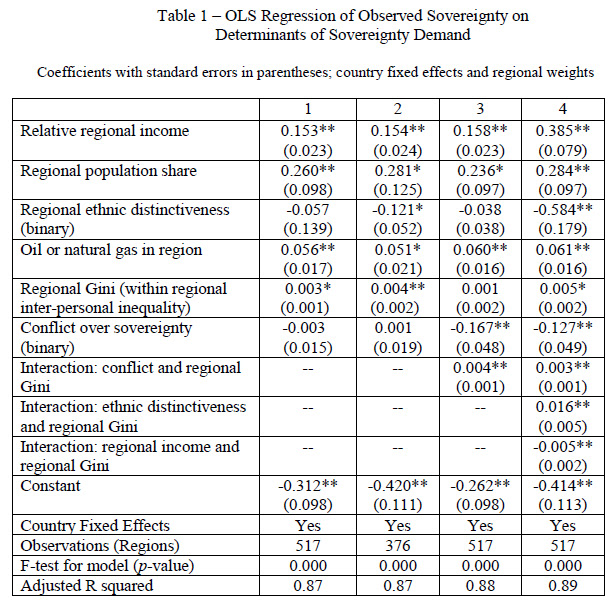