There are many blogs about economics out there. Some are more academic, others are addressed to the general public and therefore more popular and some are generally ignored like this one.

There are also some websites that provide economic blog rankings. But none, as far as I’m concerned, has put together the two dimensions above together. In any case, the real reason of this post is that I wanted to create my own ranking based on these very dimensions: quality and popularity.

The method I used is pretty simple. First, I took the 75 best blogs in economics according to econacademics. This website ranks blogs by the number of academic papers linked in their posts. For example, the first one is: Economic logic, which has linked so far more than 900 academic papers. I took the econacademic ranking as a proxy for quality.

The second step was to check their Google PageRank value as a measure of the popularity dimension. In short, the higher the value at Google PageRank, the more likely to be in the front page of any search at Google.

The result of both dimensions is plotted in the following chart: 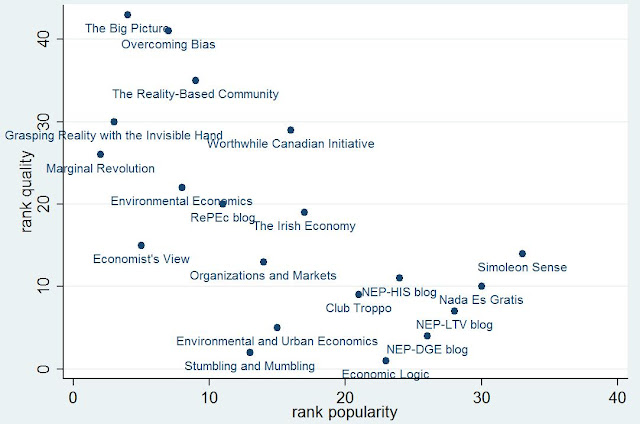 Apparently, there is a negative correlation between popularity and number of academic papers. So, if you are a blogger who wants more clicks remember not to talk about academic papers!


The next step was to rank them all by a single method. What I did is basically sum the two rank values for each blog.

And the winner is: