The curious case of GDP and the public sector

As you probably know already GDP is measured as net output or in other words excluding inputs. A simple example, let’s say a country A only produce pencils, then it’s GDP would be:

This method is applied to all product and service produced inside a country except for public services and products. Because public output can’t be measured by market means (there are no prices for public health or public primary education) economists came to the conclusion that the best way to quantified them is measuring them by their inputs.

The problem is that when using this method, inefficiency is not taken into account and GDP becomes erroneous. An example: let’s say that the public sector of country A is much more efficient that in country B, but both spend the same amount of $ (same input) on it. In such a case the GDP published by both countries would be the same although country B would be producing less public output than country A.

So, the essence of GDP which is the value added of an economy is then dodgy. FrancescoGrigoli and Eduardo Ley tried to correct this problem by measuring public inefficiency and then adjusting national GDP.

“Our results suggest that the magnitude of the correction could be significant. When
correcting for inefficiencies in the health and education sectors, the average loss for a set of 24 EU member states and emerging economies amounts to 4.1 percentage points of GDP.” 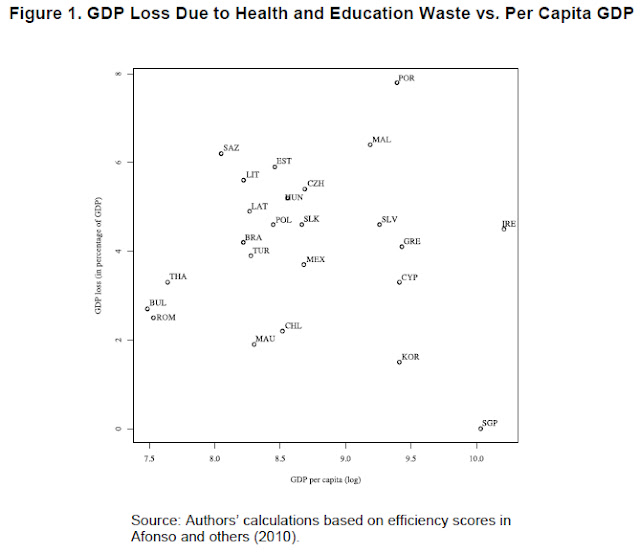 According to their explanations, there is no relation because poorer countries have smaller public sectors than richer ones and therefore their higher inefficiency is compensated.