Recently some rich people in France and US have asked the government to increase their own taxes. Some comparisons are awkward like the amount paid in taxes by Buffet or Romney which is around 15% (several percentage points below a middle class American).
The following is a nice graph that shows the evolution of the top marginal tax rates since 1916. 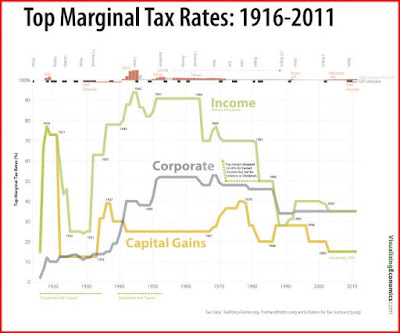 It can be found at: http://visualizingeconomics.com/2012/01/24/comparing-tax-rates/
Labels: tax

William said…
They were saying that IRS tax brackets soon going to update.

Justin said…
This article is loaded with some well-informed data. You have made admirable statements in an exceptional manner about this article. Since this has made me wonder about more things I would want to know about accounting for lawyers
June 1, 2021 at 9:54 AM