English has become the world’s language. It is probably the most important language ever. Today, no professional can survive without a proficient level. This is almost a fact everywhere, although, there are differences between professions and countries. It´s much more important for an economist than for a firemen it´s much more important in a small country that depends on international trade than a big one. However, in broad terms, it can be said that,  wherever you live, whatever you do, you better learn and become proficient in the use of the English language.

Its importance will only increase in the future and second languages will not get even closer. This is not specific of languages buut a common consequence of globalization. International trade and growing international relations need and demand less costs of transactions, language diversity only increases it.

EFP (Education First) shows in this map the level of English per country and some interesting correlations. 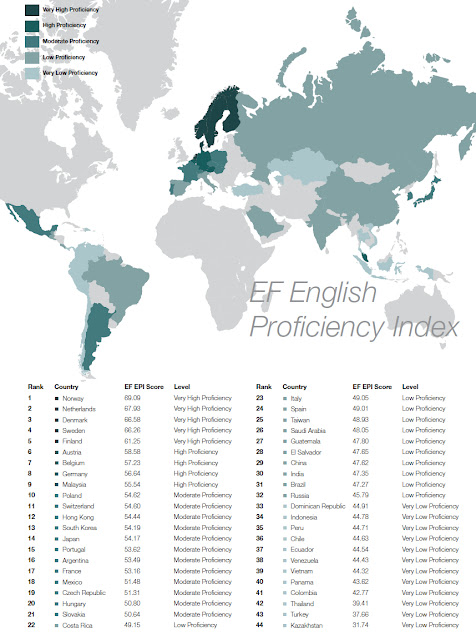 nancy john said…
I think everyone wants to ensure that they present their best work at all times. This is so whether someone is writing in English or another language. Of course, it easier when you are writing in the language that you grew up speaking.
November 18, 2016 at 5:32 AM

nancy john said…
actually english is spoken throughout the world because it is one of the most important languages and alot of countries make thier students learn it.