Last post reminded me about this article that appeared in February 2012 in The Economist. We were talking about the relation between economic growth and financial liberalisation. According to recent research the second improves the first but the price to pay for it is a higher risk and less financial and economic stability. Using Modern Portfolio Theory, we could argue that more stability can be found using diversification. So, a more diverse and opened society or country should improve its economic growth while keeping its economic stability under control. Unfortunately, diversification it’s becoming difficult to find. According to The Economist article, the correlation of international assets is becoming higher. 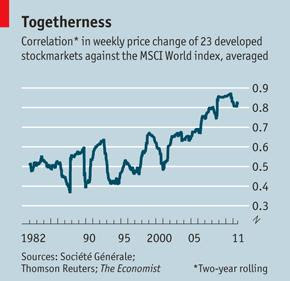 As The Economist says:


There is an irony at work here. Global funds are invested in Brazil and China because investors want a diversified portfolio. But the very act of diversification means that these markets become more tied to the developed world and the rewards of diversification are accordingly reduced. It is not really diversification when everyone has the same idea.