The economic effects of Constitutions

Person and Tabellini came up with the following table to summarize many of the findings of their book "The economic effects of Constitutions" (2005). 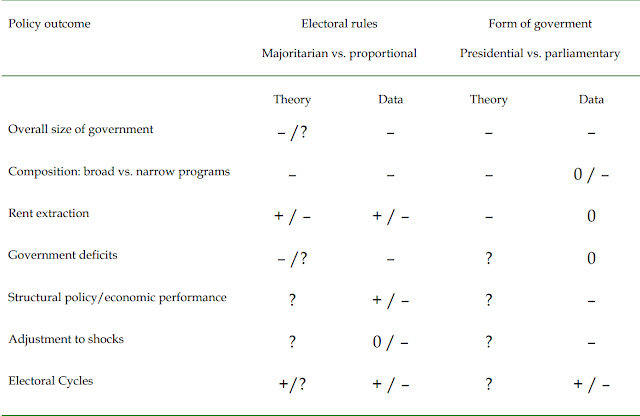 A plus sign in a Theory column indicates that a constitutional reform, replacing the feature on the right  at the top of the column with the feature on the left will induce a greater degree or a higher level of the policy outcome for that row. And the opposite for a minus sign.

One of the central findings is the effect of electoral rules on fiscal policy. Interestingly enough, changing your country's political system from the proportional to a majoritarian one, improves fiscal policy. Specifically, and according to the data, it reduces Government spending by 5%, welfare spending by 2-3% of GDP and Budget deficit by 2% of GDP.

Another important conclusion that might be related to South European countries: "coalition governments are prone to a status quo bias,[...]. Hence, their reaction to adverse economic shocks is more likely to be inefficient than the response of single-party governments."