This recent article by The economist is interesting. It says that inequality in the US has been growing since 2007 and the main reason for that is poor policies on early education:

"investment in the young should focus on early education. Pre-school is a crucial first step to improving the lot of disadvantaged children, and America is an international laggard. According to the OECD, it ranks only 28th out of 38 leading economies in the proportion of four-year-olds in education. [...] Equality of outcome will always be a fantasy, but America should do more to spread opportunity widely."


It makes a lot of sense. If the government invests in human capital of the poorest, they will improve their skills, and therefore their job opportunities. Unfortunately, as often happens in economics, empirics doesn´t match well with sensible theories. This paper by Eric A. Hanushek and Ludger Woessmann summarizes some of the empirical evidence on the relationship between skills inequality and wage inequality:

Clearly, the relationship between wage inequality and skills inequality seems to be, at best, modest. This second graph from the same paper also illustrates how uniqual primary school results are not linked to unequal societies. Iceland, Norway and New Zealand are some of the most equalitarian societies in the world. 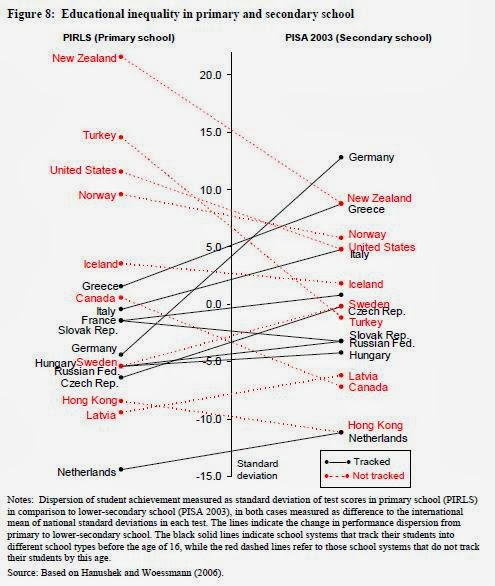 The article continues by saying market inefficiencies might also be harmful:

"America’s tax code is riddled with distortions that favour the rich, from the loopholes benefiting private equity to the mortgage-interest deduction (an enormous subsidy for those who buy big houses). A simpler, flatter code with no exemptions would be more efficient and more progressive. A blast of deregulation would help, too. Many of America’s most lucrative occupations are shielded by pointlessly restrictive rules (think doctors and lawyers)."

I think that is more the point. Subsidies to big old industries and banking bail outs can't be good for equality. Government and local regulations on economic activities, employment legislations, financing, etc, doesn't help either.