According to this paper by Stillman et.al. international migration brings improvements in personal and household incomes to the migrant but paradoxically has a negative impact on their happiness. Clearly, any analysis of this kind has a potential selection bias. That is, we shouldn't assume that the ones who migrate are exactly the same in cognitive and psychological skill as those who remain in the original country. The paper goes around this issue by using a natural experiment.  The paper compared successful and unsuccessful applicants to a migration lottery held by New Zealand. By doing so, the selection bias is ruled out. Bear in mind that the comparison, then, is between those who wanted to migrate but were unsuccessful and those who were successful. So, there’s no comparison with those who don’t really want to migrate.

The literature seems to support this result. Migrants gain in material well-being but happiness and other components of subjective well-being may be reduced. Even more contradictory is that despite a grow in unhappiness , mental health improves. The most accepted theory to explain this fact is the ‘adaptation theory’. The changes in references makes subjectivity variables change in different ways. 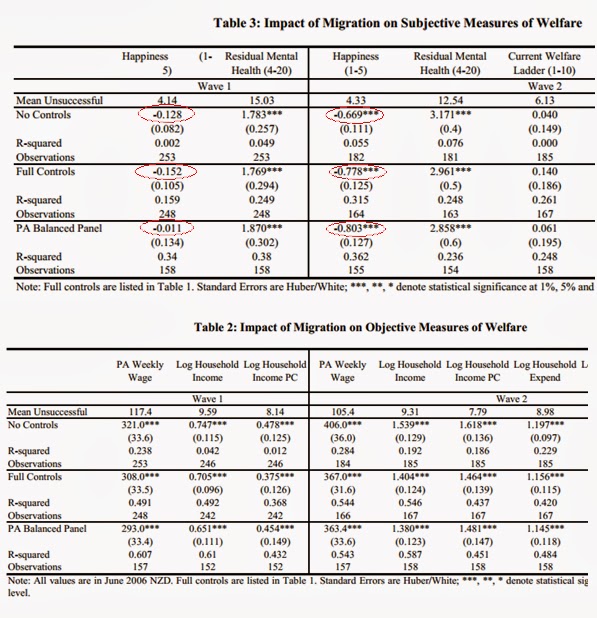 Veronica said…
Interesting post and fantastic blog. I assume that the paper refers to "economic migrants" (if we are in any capacity able to label migration as such) and not to refugees or forced migrants. Refugees and forced migrants usually suffer from mental health problems due to their migration experiences and of course from the experiences that actually forced them to migrate.
November 4, 2013 at 3:29 PM