A month ago the Telegraph published an article about how the old pensioner is ruining the young generations’ future and hopes in the UK. It was a bit harsh but the whole point was that youngsters are a minority without political or economical power and therefore brought to their knees by the politically active and rich older generations.

If that is the case, that should have a negative impact on future (present) economic growth. First, it’s known that older generations are more conservative and risk-averse: they’ve got much to lose (assets, savings) and nothing to win (low and decreasing productivity). Secondly, with a more conservative society, regulation would grow, new technologies banned (Uber, Airbnb?) and anti-inflation policies applied. With a scenario like this, younger generations’ expectations would be pretty grim. Creativity and innovation would be harder and as a consequence investment scarce. GDP growth is to good extent a consequence of expectation. Japan could be an example of this.

Research has found a direct relationship between GDP and population age. Smlan Roy, has calculated that the shrinking working-age population dragged down Japan’s GDP growth by an average of just over 0.6 percentage points a year between 2000 and 2013, and that over the next four years that will increase to 1 percentage point a year. Germany’s shrinking workforce could reduce GDP growth by almost half a point. In America, under the same assumptions, the retirement of the baby-boomers would be expected to reduce the economy’s potential growth rate by 0.7 percentage points.

The effects of population age on GDP is probably more complicated than that. Experience is key:
“A clutch of recent studies suggests that older workers are disproportionately more productive—as you would expect if they are disproportionately better educated. Laura Romeu Gordo of the German Centre of Gerontology and Vegard Skirbekk, of the International Institute for Applied Systems Analysis in Austria, have shown that in Germany older workers who stayed in the labour force have tended to move into jobs which demanded more cognitive skill. Perhaps because of such effects, the earnings of those over 50 have risen relative to younger workers.”

It is well known that there is an inverted U relationship between age and salary being 50 when the maximum is reached, ie where experience is not enough to compensate for the loss of creativity.

In any case, seems clear to me that on the extreme a society full of 70 years old pensioners could hardly grow. But even more important, a society were power is biased toward older people wouldn’t be fair.

I generated the following graph that shows the average age of the CEOs of the largests companies and Government members per country. 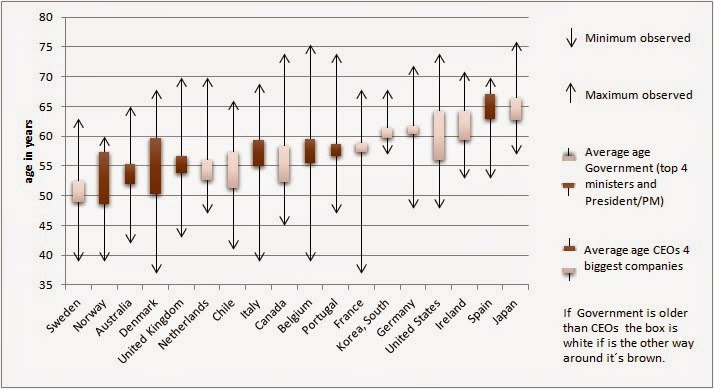 The second graph shows the difference between the average leader (CEOs and Gov. members) and the average citizen. 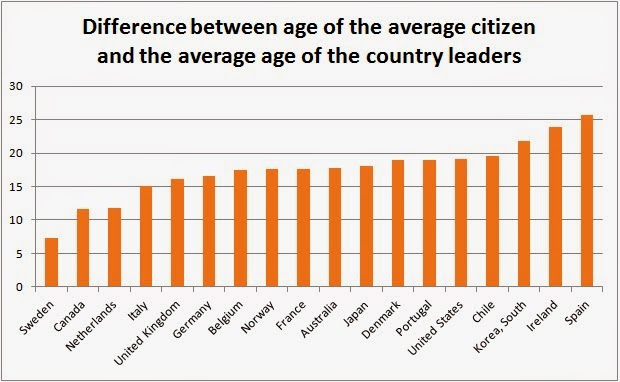 In all cases the leaders are older than the average citizen. Spain is the most extreme case, they are about 25 years older.

3yg5wye0xk said…
It is required that you're either physically present at a retail sportsbook or that you simply use an app 스포츠 토토 within the state's borders. This means can even make|you may make} straight wagers, teasers, parlays, reside in-game, totals, and player prop bets, among different varieties. This was an unsurprising development given BetRivers, powered by trade big Rush Street Interactive, had lengthy been well-positioned to reach first to the party. In truth, Rush Street’s Rivers Casino Des Plaines was the primary retail location to simply accept|to simply accept} a legal wager on March 9, 2020.
January 21, 2023 at 12:40 AM