Reading the notable book from Acemoglu and Robinson, "Why nations fail" I came across the concept of mita and the effect of it on economic growth. Mita was an extensive forced mining labor system in effect by the Spanish Empire in some regions of today´s Peru and Bolivia between 1573 and 1812. Fascinatingly, a paper wrote in 2011 by Melissa Dell (or here) found that:


Regression discontinuity results indicate that a mita effects lowers household consumption by 25% and increases the prevalence of stunted growth in children by around 6% points. Mita’s influence has persisted through its impacts on land tenure and public goods provision. Today, those regions are less integrated into road networks and their residents are substantially more likely to be subsistence farmers and with lower educational attainment.

Undoubtedly, it’s been known that historical institutions are key on current economic outcomes. This paper not only confirms this statement but finds the routes through which those institutions can have this persistent effect on growth. Aka public goods provision and land tenure. The key element of this research is that the mita required indigenous communities to send a constant share of their adult population to work in the silver and mercury mines and conscripts changed discretely at the boundary of the subjected region: on one side, all communities sent the same percentage of their population, while on the other side, all communities were exempt. This is probably an arbitrary and short informed decision of the regional government ef the Spanish Empire that allows the researcher to use as an external shock. 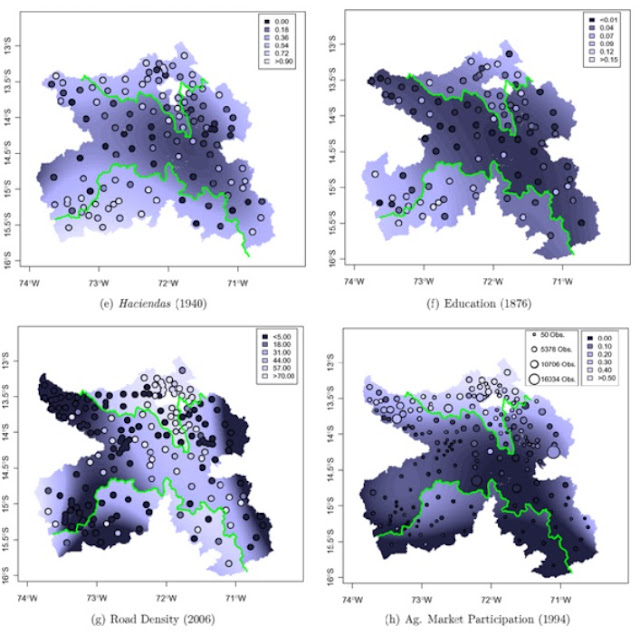 Unknown said…
Good work! A few comments, the paper was published in 2010. Dell concluded that the mita effect lowers household consumption by 32% in subjected districts today.
November 14, 2015 at 8:21 PM