How the study of history affects economics research field?

The study of the past was neglected by economists in the early 80’s. Deirdre McCloskey surveyed the use of economic history in the 70’s and 80’s and she found that economists “believe history to be of small and diminishing interest”, she concluded that the average American economist answers “no” to the question “Does the past have useful economics?” McCloskey showed a sharp decline in the publication of economic history papers in the top economic journals (AER, QJE, JPE).

Today, economic history has reverted that trend and, although still small –compared to other fields, it has become a relevant field of study according to most of research economists.

Ran Abramitzky published last month a paper about the use of economic history by economists. He found that the top 5 economic journals have increased their share of papers related in one way or another to economic history. 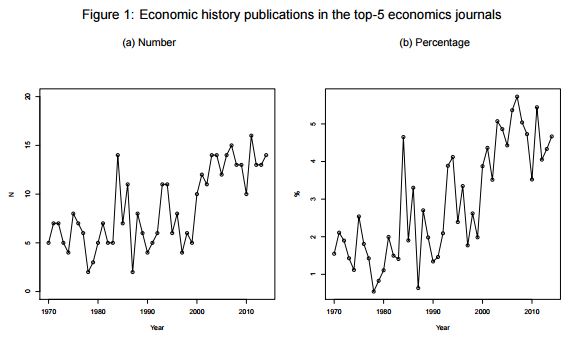 This idea that the past influences the present in a path dependence process is now widespread. Many economists argue that a process of path dependence often takes place in the modern world: norms and expectations impede change, discrimination survive even in highly competitive markets, and change can be very slow.

Another point Abramitzky makes in his paper is the problem with endogeneity in economic history. Identification of a causal effect is a main challenge for economic history but that’s no different from applied economics. Over the last two decades researchers have started to take causal identification more cautiously, changing their language to more lightly words that imply but not state causality such as “effect”, “impact” and “influence,” and only claiming causality when a random or quasi-random variation is established.

Economic history has increased the use of data and quantitative tools to solve the endogeneity problem. The classic example is the AJC 2001 paper.

Abramitzky ends quoting Arrow “it will always be true that practical understanding of the present will require knowledge of the past.”

Unknown said…
Prof. McCloskey is a "she." Recognizing basic facts like this is important to helping our discipline overcome huge disparities with regards to gender.
January 6, 2016 at 7:38 PM