Last month we saw on the news the New Zealanders (or Kiwis) getting involved in a referendum to choose a new national flag.
New Zealand confirmed that a blue, white, red and black fern and stars design won the referendum to become the contender of the current flag. A second referendum will be held in March to decide whether to adopt the new flag or keep the old one.

No research, as far as I know, analysed before the relation between flag designs and economic or political performance (all I found is this). That is because there is no point whatsoever in doing that. Any relation should be spurious or the consequence of an omitted variable bias (i.e. the assumed specification is incorrect in that it omits an independent variable that is correlated with both the dependent variable and one or more included independent variables). Nonetheless I thought it could be a light-hearted albeit interesting analysis.

I run three regressions. In the first one I used the flag design to predict the Quality of the Democracy (as measured by the Economist Intelligence Unit) by country. The second regression dependent variable is the logarithm of the GDP per capita and the third one is the Economic Complexity as measured by The Observatory of Economic Complexity of the MIT. The reference in all three regressions is a flag with the red colour in it, horizontal stripes and no symbols (those were, independently, the most common features). 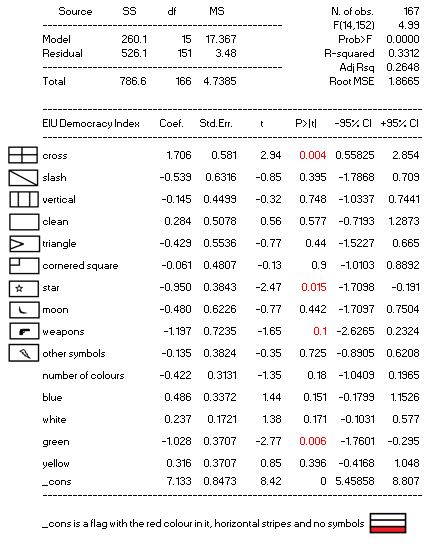 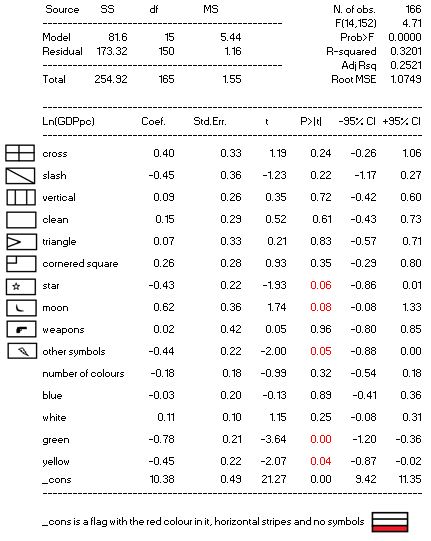 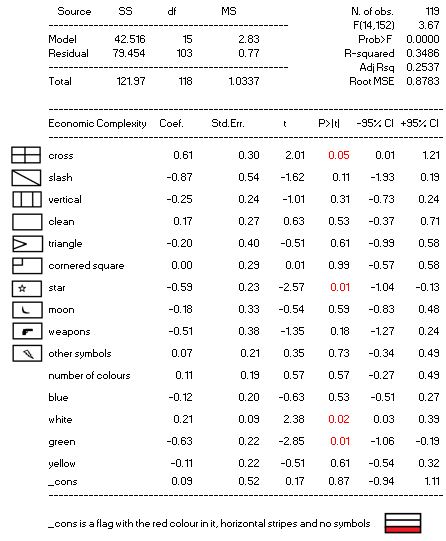 In GDP pc terms, the most negative impacts come from having a star or other symbols and a dominant green or yellow colour. On the other hand the positive and statistically significant impact comes from having a moon on the flag.

In summary, this analysis would suggest that New Zealand would be better off if their flag include some kind of cross and a significant amount of white colour. They should avoid at all cost adding a slash, or weapons, using the green colour and above all, get rid of the stars!

Anonymous said…
Every business today is up against a whole host of competition, and many companies are turning to branding experts to help them stand out from the pack and win customers.
design dine USB stick

Muteeb-Blog said…
The blogs you write include the words that have deep meanings. The worth of your words is the knowledge that you pore your writings. Keep it up and I shall come again to read your magical words. rateking
September 1, 2020 at 12:38 PM