David Cuberes and Jennifer Roberts published this paper in October last year. It deals with the geographic distribution of households’ income within the main British cities (excluding London).

They study the extent to which distance of residence from the city centre is a function of income. This is, apparently, the first study of its kind for British cities. They take into account the main potential factors influencing location, such as household characteristics and access to transport, as well as city and time effects, and taking account of both spatial and serial correlation.

They state four main findings: i) there is a strong positive association between household’s income and distance from the city centre. ii) there is no evidence that richer households locate further from the city centre mainly because they prefer larger dwellings. iii) poorer households that live closer to the city centre experienced increasing real incomes over the period relative to those who live further away. This supports the view that cities in Britain attract poor people rather than generate poverty. iv) public transport availability can’t explain the spatial distribution of income.

These results are very similar to those found for the US, and, at least for the case of Britain, they contrast with those who argued that in Europe richer households tend to live in the city centres where amenities are concentrated.

To analyze the relationship between household income and distance from the CBD they used the following model:

where i is household, t is wave (British demographic survey waves), D is distance (km) from the CBD (Central Business District), Y is the household’s real equivalent net income and X is a set of control variables.

This is the regression results: 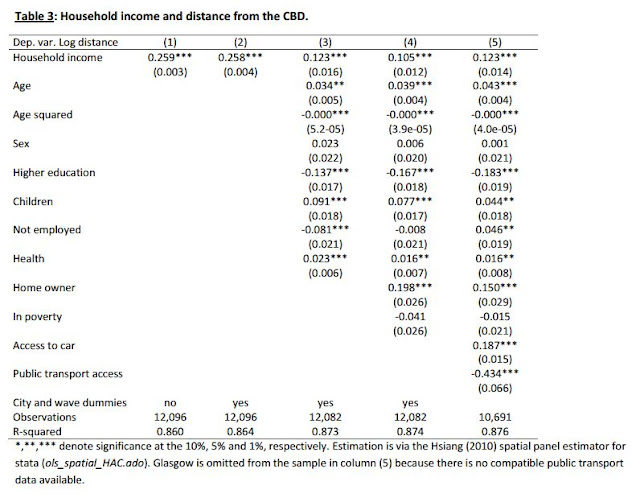 Interesting to see that children and age have a very important and significant push, while higher education population attract people to the CBD. The negative sign of higher education looks counterintuitive but the authors say "this may reflect the fact that household’s income and education are highly correlated."