This month I found this very interesting paper by Aghion, Algan, Cahuc and Shleifer (AACS) published in 2008.

For long time, it’s been argued that regulation hampers economic performance; what these authors say, however, goes one step further, they argue that regulation hinders social capital, i.e. trust in others.

The authors developed a model where there are two equilibria: a good one with a large share of civic individuals and no regulation, and a bad one, where a large share of uncivic individuals supports heavy regulation.
As the authors put it “when people expect to live in a civic community, they expect low levels of regulation and corruption, and so invest in social capital. Their beliefs are justified, and investment leads to civicness, low regulation, and high levels of entrepreneurial activity. When in contrast people expect to live in an uncivic community, they expect high levels of regulation and corruption, and do not invest in social capital. Their beliefs again are justified, as lack of investment leads to uncivicness, high regulation, high corruption, and low levels of entrepreneurial activity”.

The consequences of distrut are tremendous, “distrust generates demand for regulation even when people realize that the government is corrupt and ineffective; they prefer state control to unbridled activity by uncivic entrepreneurs. The most fundamental implication of the model”

The causality is both ways from distrust to regulation and from regulation to distrust.

This model reminds me of Alesina (2004) (or here) where “If a society believes that individual effort determines income, and that all have a right to enjoy the fruits of their effort, it will chose low redistribution and low taxes. In equilibrium, effort will be high and the role of luck will be limited, in which case market outcomes will be relatively fair and social beliefs will be self-fulfilled. If instead a society believes that luck, birth, connections and/or corruption determine wealth, it will tax a lot, thus distorting allocations and making these beliefs self-sustained as well”.

AACS also states that liberalization in a low trust environment such as the one seen in the 1990s in the ex-soviet bloc, triggers a rise in corruption at a given level of regulation, leading people to demand a re-regulation.
A liberalization shock in a regulated economy doesn’t improve people’s trust, quite the opposite, it increases corruption and as a result a demand for re-regulation.

The origin of distrust and regulation systems are set in history and deep-rooted in countries’ cultures. Hence, a change in regulation will not see a change in trust or corruption. This is the opposite to what Alesina said in his paper and in a sense this new view is a much more deterministic model. 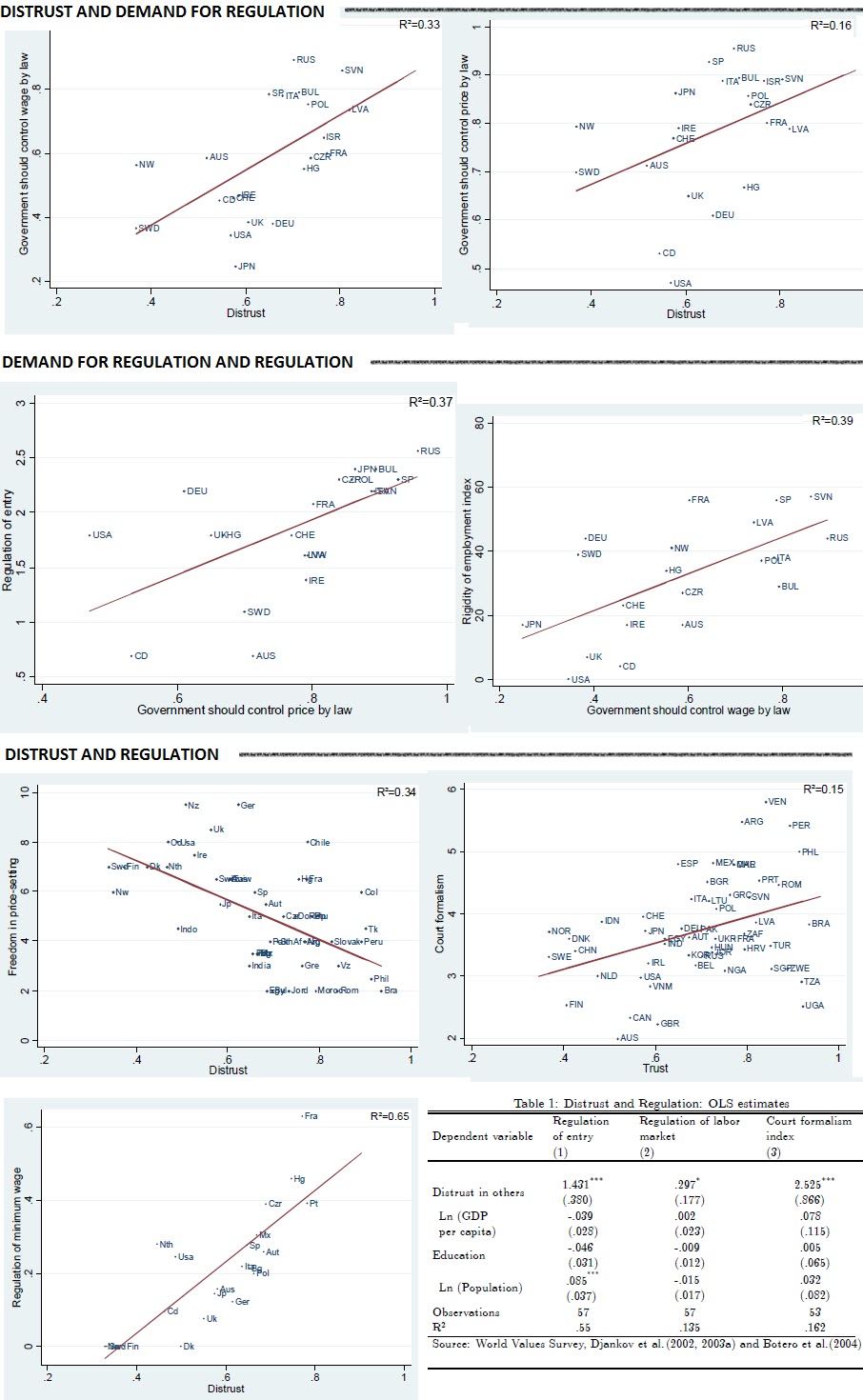 Giancarlo Salazar said…
I would think that a better approach to trust and its spillovers on economic performance should correlate to/look at transaction costs rather than at its effects on the amount of “red tape” or regulation. Not only would transaction costs show the breadth of regulation, but also how much it does cost. Thanks for the post.
Econometricus.com
May 12, 2016 at 3:07 PM