A new academic article (and free) sheds light into the effects of development aid on economic growth using a quasi-experiment. This is no minor issue, for decades economists have been discussing what is really the impact of aid on the poor. First, we have a problem of how to measure growth and aid, second how to isolate effects, the counterfactual problem, a third problem is why should aid be measured as one factor? micro-lending might not work, but mosquito nets might do. Randomised trials on development have this humble approach, while macro analysis are too broad to be meaningful, micro empirical studies on the field can provide small solution for specific located issues.

Still, the initial question is interesting, has aid done any good at all? The authors say:

"The literature on aid and growth has not found a convincing instrumental variable to identify the
causal effects of aid. This paper exploits an instrumental variable based on the fact that since
1987, eligibility for aid from the International Development Association (IDA) has been based
partly on whether or not a country is below a certain threshold of per capita income. The paper
finds evidence that other donors tend to reinforce rather than compensate for reductions in IDA
aid following threshold crossings. Overall, aid as a share of gross national income (GNI) drops
about 59 percent on average after countries cross the threshold. Focusing on the 35 countries that
have crossed the income threshold from below between 1987 and 2010, a positive, statistically
significant, and economically sizable effect of aid on growth is found. A one percentage point
increase in the aid to GNI ratio from the sample mean raises annual real per capita growth in
gross domestic product by approximately 0.35 percentage points." 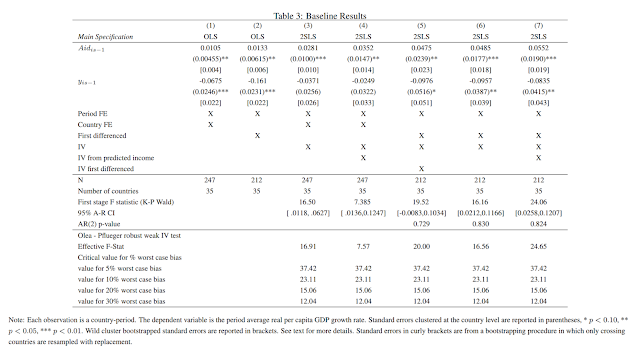