Universities and their impact on the local economy

What impact does a University have on their region of origin?

In Europe and elsewhere many universities were established decades or centuries ago. They were so by local or regional interests.  It is certainly the case that regions with economic power and growth are the ones with more universities. But what's the direction of causality? Are unis adding anything to the existing economic power of those regions? Obviously, finding any causality on Universities impact on the local economies is going to be very hard due to endogeneities.

Michael Andrews from NBER found a clever way of avoiding that research loop using a quasi-natural experiment. In his paper How Do Institutions of Higher Education Affect Local Invention? Evidence from the Establishment of U.S. Colleges he compared regions where a uni was established against the places the decision-makers considered but fell short (ie: runner-ups).

"When using runner-up counties as counterfactuals, establishing a college causes 48% more patents per year. Linking patents to novel college yearbook data reveal that only 5% of patents in a college’s county came from alumni or faculty of that college."

In other words, unis create a lot of positive spill-over effects on the local economy. 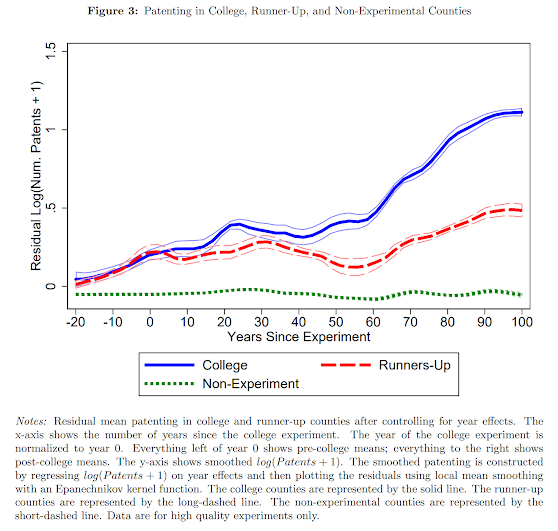