On Second of March 2022, the UN General Assembly voted  the resolution A/ES-11/L.1 "deploring ‘in the strongest terms the aggression by the Russian Federation against Ukraine’ in violation of the UN Charter and demanding that Russia ‘immediately cease its use of force’ against eastern European country."

The resolution was passed with 141 positive votes, 5 nos, and 35 abstentions. I was curious to see who those five nos were and turns out it was Syria, North Korea, Eritrea, Belarus and of course Russia.

If these countries have anything in common is their poor record in Human Rights and Democratic institutions. Actually, by many standards this group of countries had one of the lowest possible democratic scores any random group of five countries could have in the world,  even historically.

This group of five was so exceptional, that I decided to analyse the vote from a data point of view.

The first thing I did was to download all the UN General Assembly votes since its inception in 1945. You can get it from here. In total, more than 5,000 votes have taken place. Each of which, has a Yes, a No and abstention/No vote option. Around 16,000 vote options in total.

Has any vote option ever managed to bring together countries with such a low democratic score?

I used PolityV for the the democratic score records since 1945. I had to fill out a few missing records though. For countries during war periods PolityV had no democratic score values, in many cases, however, this same countries did cast a UN vote during those years. In such cases, I used the last PolityV value available, usually for the year just before the conflict started. Other countries with UN vote records, simply were not assessed by PolityV, because they were too small eg. Nuaru, Luxembourg,... In those cases I used the PolityV democratic score of neighbouring countries.

One more measure was needed, though. Country PolityV scores, back in mid XX century, used to be much lower than today. Due to colonialism, and the Cold war, countries with democratic institutions were much rarer and many with a short-life span. Extreme idealisms, undemocratic neighbours expanded like virus.

Fortunately, that's not as common these days, but it's a bit biased to assess all the PolityV scores since 1945 equally. As a result, I decided to adjust the scores by year. Therefore, two countries with the same low score in PolityV, say, one from 1963 and the other one for 2018, have been adjusted so that the former will show a HIGHER democratic score than the latter.

The result is shown in the graph below. Each dot is a vote option (16,000 of them). As expected, they show a bell shaped distribution. The higher the agreement on a vote option (vertical axis), the more average their democratic score, as a group is. To get to a very high (or very low) democratic group-score (horizontal axis) only the very best (or worst) democratic countries in the world must agree.

No vote option has ever had more than 200 votes, because no year has the UN had 200 countries registered. There are currently 193 countries in the UN.

The red dot shows how undemocratic that group of five countries that voted No was compared to every other vote option ever (normalised by year). Unfortunately, PolityV is only updated until 2018, not 2022, so I used 2018 PolityV scores to assess that 2022 resolution. 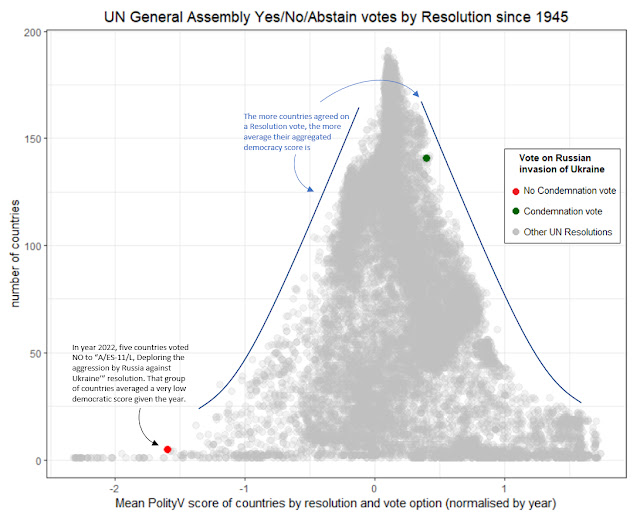 Now, historically, there have been vote options that only the must undemocratic country in the world supported. Those rated worse than the red dot. But, five countries together would have never reached such a low rating (there's never been a group of five with such a low rating as the very worst).

So, the final exercise was to adjust by the size of the group to answer the question: How low was the democratic score of the red dot group for a group of that size (after normalised by year)? 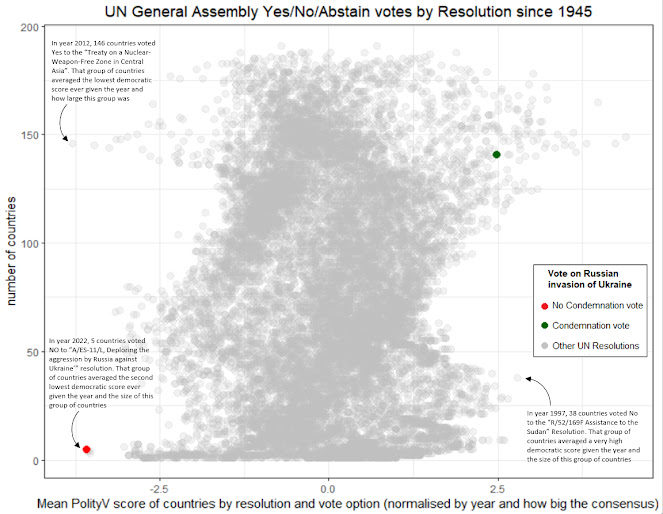 Turns out, that the NO vote-option group of countries on that A/ES-11/L.1 resolution had the second lowest democratic score ever once normalised by year and the size of the group. Only in 2012 we saw something lower.

I uploaded the whole R code for this to Github.

pdms3aeep3 said…
Therefore, this 토토사이트 is a wonderful recreation to stick to if you want to|if you want to} play a high-quality recreation. You can use this website both in your computer and cell units. USA players who would possibly in any other case have points signing up for a casino website are welcome here. Just notice that is not a|there is not any} free demo play for any of the slots. We promised a radical set of reviews of the highest on-line slots today, however permit us to dial it back a bit with a extra simplified model to assist in your alternative.
February 3, 2023 at 5:36 AM