A year ago I wrote about statistical software, data analysis languages and their impact on salaries. I decided to give an update today.

Using LinkedIn US, I searched for jobs that had any of those languages in their description in addition to the words ‘data’ and ‘economics’. Then I worked out the average salary for those jobs where wages were available. 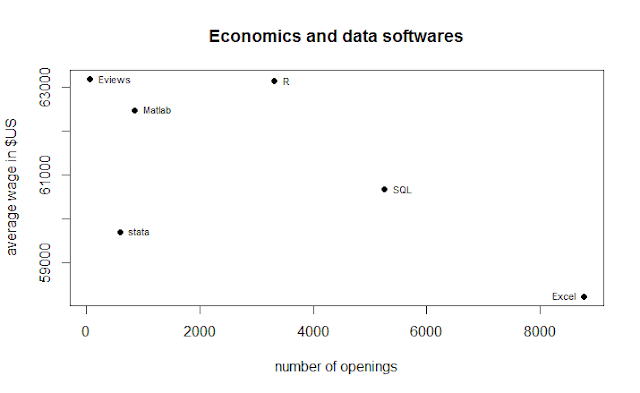 Surprisingly, Eviews came on top followed by R. Salaries for those two are, on average, slightly above 63,000 $US. Yet, a big differerence remained; R had more than 3,000 opening positions across US while Eviews had only dozens. Excel ranked, not surprisingly, the lowest; the average salary happened to be 58,000 $US.

It was strange to see Stata performing so badly. Yet that is something we already saw on last’s year analysis. The reason could well be that Stata is the data language of the academia where salaries tend to be lower than the financial/consultancy sectors, for a given set of skills.